Chinnamasta Temple dedicated to Goddess Chinnamasta is a hindu pilgrimage centre and located in Rajrappa, in Ramgarh district of Jharkhand. It is situated on a hillock at the confluence of the Damodar and Bhera (Bhairavi) Rivers near the Rajrappa falls. The main attraction of the Chhinnamasta (also known as Chinnamastika) temple is the headless deity of Goddess Chinnamasta which stands on the body of Kamdeo and Rati in the lotus bed. Chhinnamasta ( “She whose head is severed”), often spelled Chinnamasta and also called Chhinnamastika and Prachanda Chandika, is one of the Mahavidyas, ten Tantric goddesses and a ferocious aspect of Devi, the Hindu Divine Mother. Chhinnamasta can be easily identified by her fearsome iconography. The self-decapitated goddess holds her own severed head in one hand, a scimitar in another. Three jets of blood spurt out of her bleeding neck and are drunk by her severed head and two attendants. The place attracts devotees from all parts of Bihar, Jharkhand and West Bengal. Apart from the main temple, there are ten temples of various gods and goddesses such as the Surya (Sun God), Hanuman and Lord Shiva. Many smaller temples have been built around the main temple such as the temples of Ashtamatrika and Dakshina Kali. The temples of Mahavidyas built in a series nearby are Tara, Shodashi, Bhubneswari, Bhairavi, Bagla, Kamla, Matangi, Dhumavati. 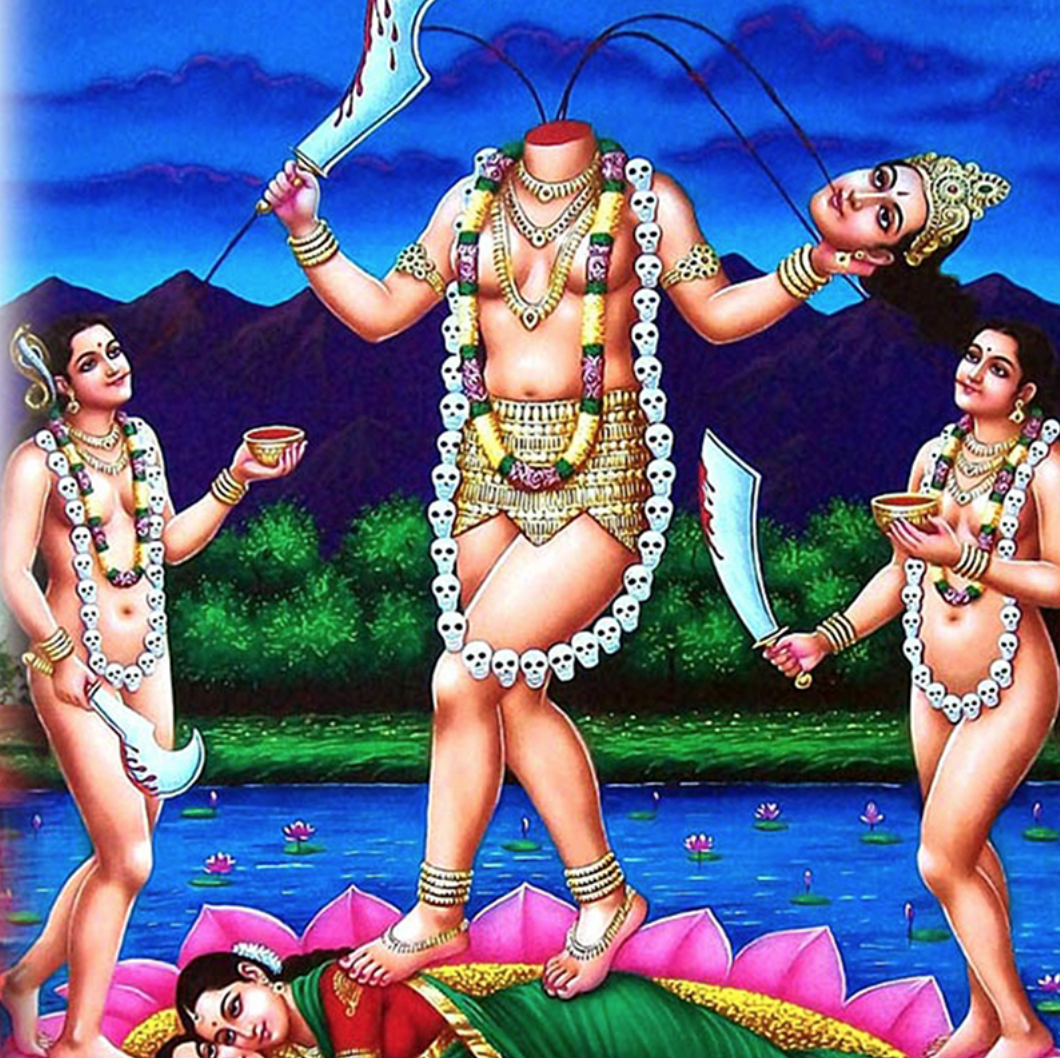 This location has a special significance. It is at the union of Bhairavi nadi(female) coming from top, meeting Damodar nada (male) signifying vipareeta rati ( opposite coppulation) pose as described in Devi Chhinnamasta’s dhyana (vipareeta rataturam). Here Bhairavi is active shakti and Damodar is the male passive member of rati action. Damodar is very calm and Bhairavi is the active member. The temple enshrines the Goddess Chinnamasta (the beheaded Goddess Kali), one of the ten forms of the Goddess Durga. The temple is very old and the place Rajrappa finds mention in the Vedas, Puranas and Hindu scriptures as a “Shakti Peeth”. The art and architectural design resembles the design of temples of Tantrik importance.The temple is considered as notable as the tantrik site of Kamakhya Temple of Assam which has a similar architecture. The temple is one of the 10 Mahavidhyas. The ancient temple of Goddess was destroyed and later a new temple was constructed and the original idol of Goddess was placed in it. Animal sacrifice is still practised in the temple. The sacrificial animals are killed on Tuesdays, Saturdays and during Kali puja.